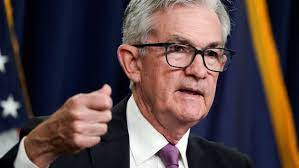 Along with a public promise to lower inflation – currently at 40-year highs – Fed Chairman Jerome Powell issued a warning on August 26 that rises would continue and higher rates were likely to stay in place.

“We will keep at it until we are confident the job is done,” he said.

While officials are indicating that tight policy is likely to persist well into the future, traders are accordingly expecting the Federal Reserve to raise interest rates by another 0.75 percentage point this month.

As mentioned by CME Group’s FedWatch tracker of fed funds futures bets, the probability of a three-quarter point hike moved to 82% on Wednesday morning.

Major U.S. stock indexes closed Wednesday’s trading day higher, with the Nasdaq Composite ending a seven-session losing streak. The price of oil fell to its lowest point since the invasion of Ukraine. The benchmark 10-year U.S. Treasury yield closed at 3.264%, down from 3.339% on Tuesday, as Treasury yields also decreased.

Stocks rose shortly after the market opened on the last day, despite traders increasing their bets on the Fed tightening. Stock futures temporarily fell after a Wall Street Journal article mentioning the potential of a 0.75 percentage point hike coincided with traders’ pricing in the more aggressive move.

Quoting Citigroup economist Andrew Hollenhorst as saying in a client note on Wednesday, CNBC wrote, “In June a 75 (basis point) rate hike from the Federal Reserve was seen as a surprising acceleration from the 50bp and 25bp delivered at the two previous meetings. Less than three months later, 75bp has become something of a global norm with both the (European Central Bank) and Bank of Canada set to raise rates by 75bp”.

Hollenhorst also adds that those ‘expeditious’ rate hikes come from a similar logic  – in economies where inflation is running well above target, there is little argument against at least returning policy rates and financial conditions to a ‘neutral’ setting if not moving into restrictive territory.

Since the early 1980s, the Fed has raised interest rates at the quickest pace on record. As a result, in July, the benchmark federal funds rate climbed from a range of 2.25% to 2.5% from a near-zero level in March.

By the end of the year, several officials expressed a desire to raise the fed-funds rate to 4%, or around 1.5 percentage points higher than it is at the moment. At each of the three remaining Fed meetings this year, rate increases of various amounts may be used to achieve that goal.

According to some analysts, an offensive approach would indicate a 0.75-point rate increase at the upcoming meeting, followed by two smaller increases.

St. Louis Fed President James Bullard said in an Aug. 18 interview he was leaning in favor of a 0.75-point rate increase this month to raise the fed-funds rate to around 4% by year’s end. Pointing toward the need of increasing the interest rate quickly, Bullard said, “I don’t really see why you want to drag out interest-rate increases into next year”.

Markets were ready for a strong dose of Fed speeches on Wednesday, with Fed Governor Lael Brainard’s remarks at 12:40 p.m. ET serving as the highlight. Michael Barr, the influential vice chair for supervision and governor of the Fed, will speak in public for the first time since being appointed.

Powell will respond to questions from the Cato Institute today.

Before the Federal Open Market Committee meeting on September 20–21, Fed officials will be closely watching the final important data points. Next week’s readings of both the producer price index and the consumer price index will be significant among them.

Any sustained improvement in financial conditions, such as those brought on by declining rates and rising stock prices, may have the opposite effect and increase inflation.

Following their meeting on July 26–27, when Mr. Powell suggested at a news conference that the central bank would ultimately reduce its rate rises, the markets rallied, easing financial conditions. This discomfort amongst officials led to their decision to cancel the meeting.

The Fed’s efforts to stabilize the economy may have been somewhat undercut by the rise. According to the Mortgage Bankers Association, the average 30-year fixed mortgage dropped to 5.45% in mid-August from 5.82% in July.

According to Jonathan Pingle, chief U.S. economist at UBS, following that rally, “they are much more aware of the communications issues they face with markets.” Last week, mortgage rates went up to 5.94%, the MBA reported on Wednesday.

Officials are trying to convey their expectations that rates will need to stay higher for a longer period of time, and “a third 0.75-point boost is one method to communicate that message.